The NHS has been the pride and joy of the United Kingdom ever since it was established in 1948 as part of the major social reforms following the Second World War. It is, at once, an institution the British people are very protective over and also, understandably, a target for people outside the UK who need medical help.

This is the subject of a recent court case which is bound to divide our readers, highlighting both the desperation of some to access the NHS and the strict rules surrounding the institution that allows it to exist effectively.

A Ghanaian national, who we will refer to as Ms K, was diagnosed with breast cancer in her own country in 2015. She came to the UK in May 2015 on a visa permitting entry on medical grounds, then went back to Ghana. She returned to the UK again on another medical visa and underwent surgery.

After this Ms K applied for further leave to remain on the basis that returning to Ghana would mean not getting the medical treatment she requires. In her opinion this would be a breach of her human rights because leaving the UK, she says, “would be disastrous and may lead to (her) death”.

What Ms K is referring to here is the use of Article 3 of the European Convention of Human Rights, which prohibits ‘torture, degrading treatment or punishment’.

The judge ruled that it was reasonable for Ms K to resume treatment in Ghana and that her case did not amount to a beach of Article 3. He made the point that although it may seem harsh, the rules must be stuck to. The rules, he says, would be rendered pointless if people could simply dodge them by citing Article 3 of the Human Rights act when they are denied leave to remain. 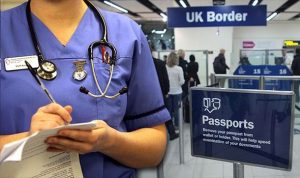 People from overseas paying for treatment:

There is often some concern for many UK residents that people may come to the UK solely to exploit the NHS, which can clearly be debated on a moral level. But what does the law actually state on this matter?

For refugees, asylum seekers, supported individuals and looked after children:

(a)has been granted temporary protection, asylum or humanitarian protection under the immigration rules;

(b)has made an application, which has not yet been determined, to be granted temporary protection, asylum or humanitarian protection under those rules;

(d)has made an application to be granted temporary protection, asylum or humanitarian protection under the immigration rules which was rejected and who is supported under—

(ii)section 21 (duty of local authorities to provide accommodation) of the National Assistance Act 1948(3); or

This essentially means that people officially deemed refugees and asylum seekers do not have to pay for medical treatment in the UK. However, Ms K does not fall into any of these categories. So not only will she not be able to stay in the UK on the basis of her illness, she may also have to pay for her treatments.

From her case, overseas visitors or people in the UK with no legal status should bear in mind that NHS fees will only be exempted in rare cases that strictly defined by the law. And applicants who own NHS debts could lead to visa refusals in the future. It is wise to pay off any NHS fees or at least to arrange to pay them before an application being submitted.

If you or a family member is ever in any doubt about being entitled to the NHS please do not hesitate to get in contact with us. We are able to advice on matters such as this, and it may save you some time and worry!